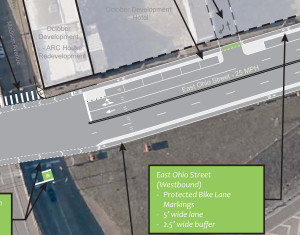 In late 2014, the Northside Leadership Conference Pedestrian and Bicycle Committee learned PennDOT District 11-0 was in the final design process for improvements to the section of East Ohio Street between East Street and Chestnut Street. This corridor has one of the highest rates of vehicular/pedestrian accidents in PennDOT District 11-0, a three-county area.

Representatives of the North Side committee asked to review the PennDOT plans, and realized there was an opportunity to include pedestrian and bicycle improvements in the design. Nick Ross, chair of the committee said, “Everyone is a pedestrian at some point during their trip, and many also ride bicycles. We need to be thinking beyond car rides, and incorporating healthy transportation choices into our daily routine.” Abe Stucky, the Leadership Conference’s community organizer, then mobilized and coordinated the committee’s efforts with PennDOT, the City of Pittsburgh Pedestrian and Bicycle Coordinator Kristin Saunders, City Transportation Engineer Amanda Broadwater, and representatives of BikePGH.

At that point Pashek Associates, a landscape architecture and community planning firm with its office adjacent to the project area, offered assistance. John Buerkle, president of Pashek Associates and a member of the committee, and Sara Thompson, a Pashek Associates principal, reviewed and evaluated PennDOT’s proposed improvements. Then, with input from Stucky and the above organizations, they prepared a plan demonstrating how best practices for bicycle and pedestrian facilities (from the American Association of State Highway Transportation Officials and the National Association of City Transportation Officials) could be incorporated into the plan. 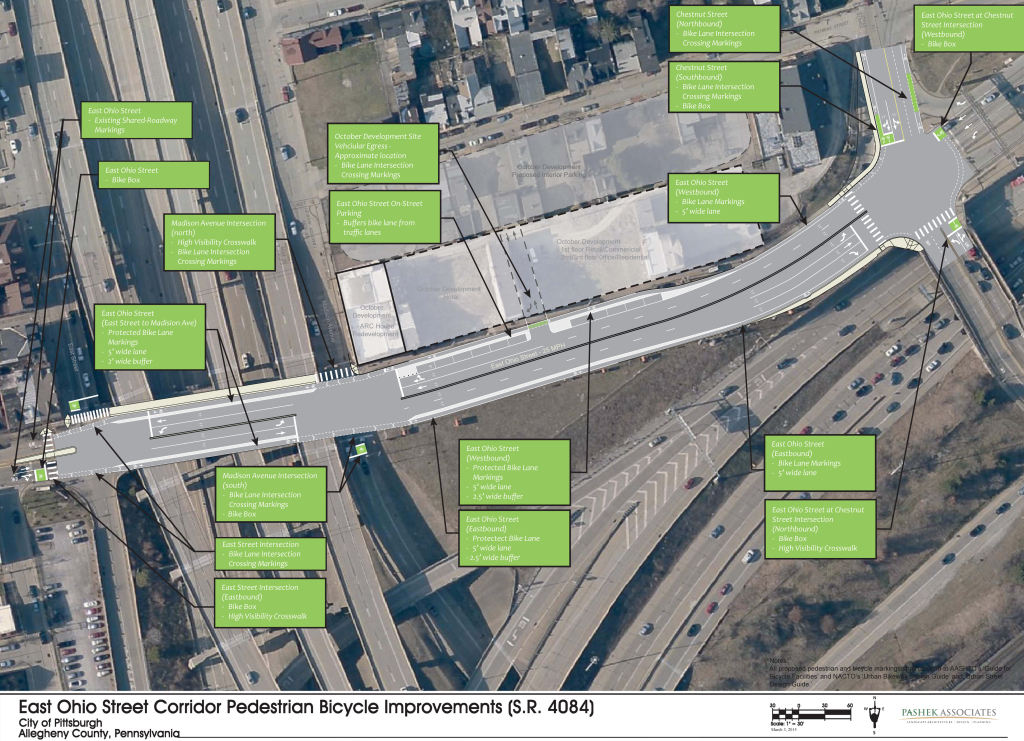 Cheryl Moon-Sirianni, PennDOT District 11-0 Assistant District Executive for design, said, “Pashek’s design made a convincing argument for the improvements, as they took into consideration PennDOT’s goals and objectives for the vehicular improvements and worked within the constraints of the physical environment to incorporate these pedestrian and bicycle safety improvements along the corridor.”

Nick Ross said, “Our proposal was a long shot. We approached PennDOT at the 11th hour in their design process. They had every reason to say we came too late into the process, and therefore our proposed improvements could not be implemented. However, PennDOT recognized the improvements would improve the safety of the pedestrian and bicycling environment, and was committed to incorporating those improvements into their design.”

John Buerkle said Pashek Associates, located along East Ohio Street since the 1990s, was pleased to donate work for this endeavor. “We want to give back to the neighborhood through our design work, and we truly believe these improvements will not only improve safety for pedestrian and bicyclists, but also will have a positive impact on the East Ohio Street business district.”

He added that the improvements are a small piece of a larger plan for bike-pedestrian corridors. The North Side committee is working toward an overall pedestrian and bicycle master plan for the neighborhood. Immediate goals include extending bike lanes along East Street to the northern neighborhoods and Riverview Park, and working with the city and county to extend bike lanes along Chestnut Street and the 16th Bridge to connect to the protected bike lane along Penn Avenue through the Downtown/Lawrenceville corridor.

The East Ohio Street improvements will be constructed over the next two years, beginning this summer and concluding in fall 2016.