Since we’ve constructed a green roof on part of our office building in late 2006, we have learned several things that we want to share:

Green Roof Type
Extensive
100, 2’x2’ trays with 4” of growing medium
Southern exposure
Plants
Sedum spurium ‘Red Carpet’
Sedum album L
Sedum kamtschaticum var. ellacombeanum
Sedum rupestre
Lessons Learned
Irrigation – We watered periodically during the first growing season to get the plants established.  We did use a drip irrigation system during that period which made it a little easier.  Since then, we have removed the drip irrigation and haven’t watered anything, except once or twice when one of the staff has recognized that it hadn’t rained in several weeks.  We recommend sticking to a strict watering schedule in which the plants are watered thoroughly every few days for the first week or two, and then once a week for the first growing season.  Long, deep watering encourages deeper rooting and stronger, healthier plants.  If the water just reaches the surface, so will the roots, which prevents the plants from gathering more water during droughts. 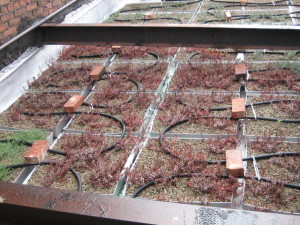 Maintenance – During the first and second growing seasons, we weeded the green roof several times a year.  Since then, we have weeded once or twice a growing season.  Typically, an employee will take a break from their daily grind to spend five or ten minutes on a beautiful day weeding.
Plant Selection – All of the sedum have been doing well except Sedum spurium ‘Red Carpet’ which seems to get scale.  We recommend mixing a large variety of species in order get a higher survival rate and ensure that a disease won’t wipe out an entire area.  Sedums work well with shallow soils such as on our roof.  However, most are non-native.  If you want more native plants, six inches or more of growing medium is best.
Environmental Benefits – Our green roof retains up to 95 gallons of water during a rain storm.  That’s up to 95 gallons of rain water that doesn’t flow directly into the Combined Sewer system and into the Rivers.  It is also providing some refuge for several species of bugs.  We haven’t measured the air quality, but know that our green roof is producing more oxygen and absorbing air pollutants.
Cost Benefits – We are in the process of figuring out how much energy we save due to the green roof.  We already know that it is protecting the rubber membrane underneath from harmful UV rays and therefore extending its normal life span. 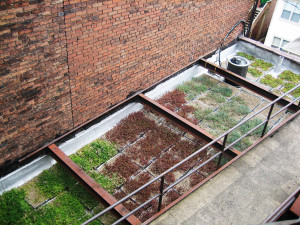 Final Thoughts – If you are part of a small office building with just a few employees, constructing a green roof is possible with just a little bit of effort and money.  Sedums are the easiest to maintain.  Creating a maintenance schedule for the first two growing seasons will help ensure that your investment does not die.  Our office has a dishwasher and trash duty schedule in which each employee is responsible for about one month out of the year.  This can be adapted to a green roof maintenance schedule.  If you really want to know all of the specific benefits your green roof will have, try installing monitoring equipment or just look at your utility bills.  Finally, we couldn’t tell everyone that they should put green roofs on their buildings unless we also encourage them to first consult a structural engineer to determine if a green roof is feasible.

When you think of infrastructure, you usually think of things like roads, sewer systems, water supply, power grids, etc… It is the basic physical structures needed for a community to enable, sustain, or enhance a certain standard of living for its residents. It enables the buying and selling of goods and services at a more efficient level. Could you imagine your workplace without internet, electricity, or even roads connecting you to your clients?

Wetlands and riparian buffers are green infrastructure.
But what does it mean when “green” is placed in front of the word infrastructure? Green Infrastructure is a concept that can, and should, be applied to all different scales of planning and design. Basically, it includes everything from strategically planned and managed networks of natural lands, to working landscapes, to recreational landscapes, and other open spaces that conserve ecosystem values and functions. In other words, greenways, parks, riparian buffers, wetlands, floodplains, rivers, and even stormwater Best Management Practices such as rain gardens, porous pavements, green roofs, and trees are all part of Green Infrastructure. It recognizes the importance of natural systems and processes within our communities.

Green roofs and rain gardens are green infrastructure.
Why has Green Infrastructure become so important in the last 10 or 20 years? Well, because it is beneficial for the environment, human health, the economy, and our society as a whole. Working with and using natural processes ensures that we’ll have resources for future generations. Stormwater BMPs reduce flooding, pollution, and the strain on our storm sewers. Street trees beautify our neighborhoods, increase property values, reduce the urban heat island, and absorb air pollution and stormwater. Greenways help protect steep hillsides from being developed and eroded, protect wildlife habitat, and offer recreational opportunities. Constructed wetlands not only provide wildlife habitat but filter pollution and even human waste.

So the next time you step outside, try to identify what types of green infrastructure are present and how they help to make your community a better place.

In 2006, Pashek Associates decided to experiment with designing and building a green roof on our 1890’s office building located at 619 East Ohio Street on the Northside.  We wanted to see what we could do with a little money, a little time, and a little physical labor.  After discussing different options, we decided on a simple extensive tray system, mostly because the manufacturer was using them on a larger project in the city and agreed to put an extra one hundred trays on the truck and deliver them at a discounted price. 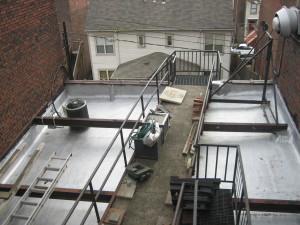 One cold December morning, we put on our working gloves and carried the 50-pound trays filled with special growing medium into place, assembly line style.  Each 2’x2’ aluminum tray was set down on five small rubber pads to allow excess roof runoff to flow under the trays and into the existing roof drain.   No other material was applied directly to the roof.  It was as simple as that! 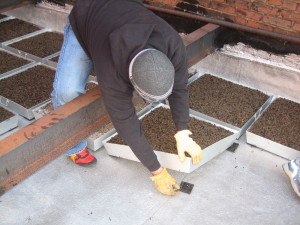 Then, on a warm spring day, the whole office pulled our gloves back on and planted the trays with several varieties of sedum.  We used small plugs and get them a good soak using water from a rain barrel attached to our third floor roof.  We did install a drip irrigation system for the first growing season.  We have removed the system and haven’t needed to water the plants since. 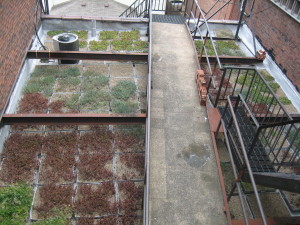 A couple years later, we thought we had a roof leak.  A roofing contractor moved the trays around the roof in order to find the leak.  He was surprised to find that there was almost no degradation of the roof membrane as a result of the green roof trays.  Ultimately, instead of finding a leak in the roof, the contractor found a leak in a brick wall.  That’s when we knew that our green roof was really doing it’s job! 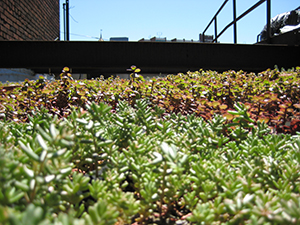