John and Mike were extremely pleased with the turn out for this meeting.  30 to 40 members of the Hollyloft Cycling Team showed their support by taking time to stop by during their weekly Tuesday night ride.  A quick head count indicated that an additional 70 plus persons attended the meeting.  The high attendance really shows how Jamestown residents are interested in making walking and bicycling safer and more comfortable within the City. 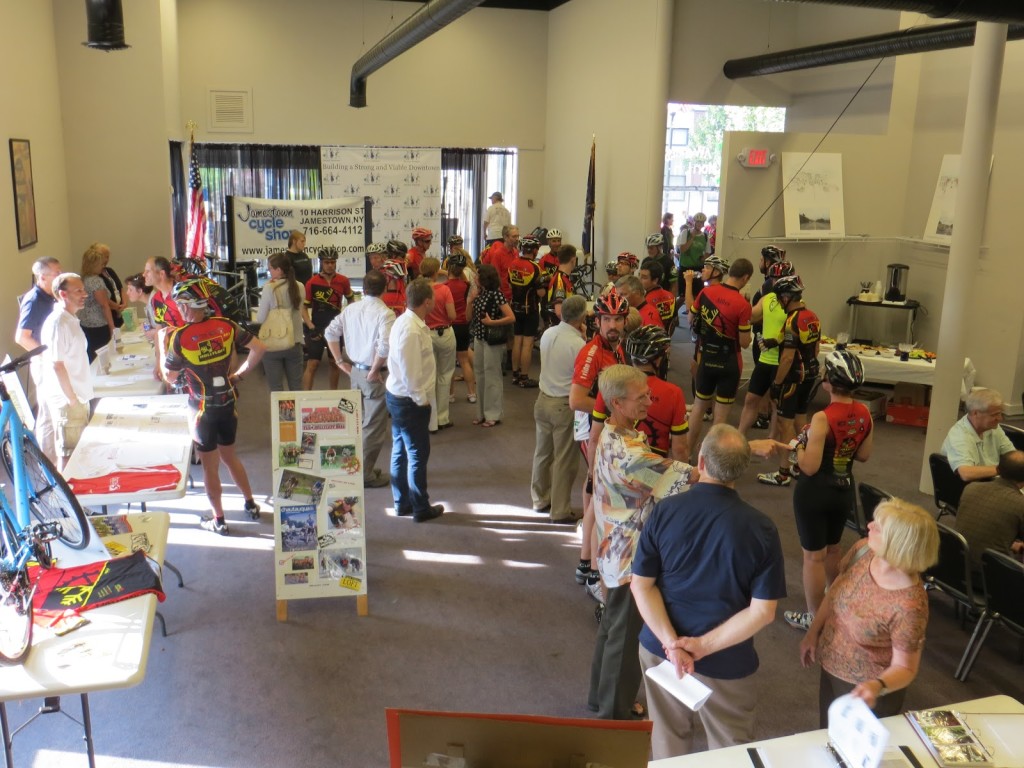 The Chautauqua County Health Network’s Creating Healthy Places to Live, Work, and Play is coordinating the plan to promote active transportation as a key component of healthy lifestyles. CHP is funded through the New York State Department of Health.

“We know that if the city is more walkable and bikeable, that will encourage the community to go out and be more active and we are focused on the public health aspect of chronic disease prevention,” said Janet Forbes, CHP project coordinator. “Having this plan in place is going to be helpful for substantiating the need for funding and what the next steps are.” 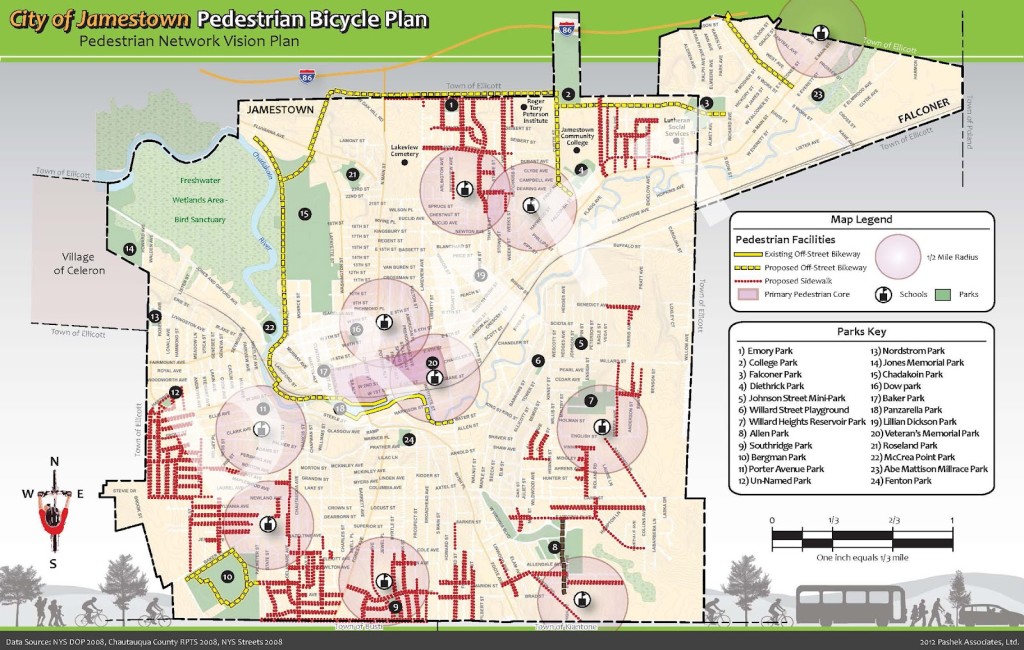 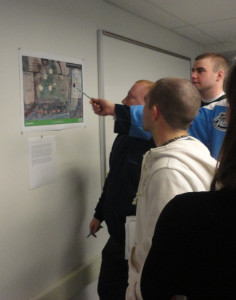 Jim Pashek, president of Pashek Associates was the first of three lecturers from the firm invited to speak at Slippery Rock University on park planning. The lecture Jim presented focused on the five steps typically found in master planning for parks, (1) Community background data collection, (2)Public Participation, (3) Site Analysis, (4) Programming the Activities in the park, (5) Developing the concepts, final master plan drawings and cost estimates. After an introductory lecture to orient students to public processes, they participated in a mock town meeting, generating park ideas and prioritizing those needs. Professor Christine Glenn commented on Pashek’s mock meeting, “I was struck by how effectively you guided the public meeting. I’ve seen those types of meetings get quickly unfocused. Yesterday, you effectively modeled key techniques which help to maintain control of the discussion and direction of the meeting. I was very impressed with this, and learned a great deal, which I hope to utilize in the future.”

After learning about criteria often used to layout parks, the students were broken up into teams of 4-5 each and given a park site analysis and program to fit to the site. They were cautioned to respect environmental constraints, the proper solar orientation of facilities, and important activity adjacencies.

Each team then reported why they selected the park plan they developed and how they were able to apply some of the design principles taught in the class.

John Buerkle will be lecturing on the design of Athletic Fields and Mike Kotyk will be providing information on how to plan greenway corrdiors during the next two lectures.

Jim Pashek just completed the second of two certificate trainings managed by the National Charrette Institute (NCI). This second training, held in beautiful Vancouver, BC, focused on the logistics of planning and running the NCI charrette process. Bill Lennertz, Executive Director of NCI indicated that this was the “masters” class for those who really want to get into the nuts and bolts of how to set up a room, manage challenging public meeting participants and build in successful elements of a great charrette.

Marcy McInelly, founder of Urbsworks and charrette consultant shared her experiences in a very useful debrief of a major charrette held in Colorado recently. It was really helpful to learn what worked and what did not. They realized that the charrette activities were better suited for five days or more to ensure quality feedback loops and room to shift gears mid-course if needed.

The challenge for many of our clients and colleagues is the attempt to use parts of the NCI charrette process without understanding the implications of shortening or eliminating portions of the process. Typical charrette processes involve about 50% of the work leading up to the charrette week and an important amount devoted to post-charrette work.

If you are interested or would like to know more about building a charrette process, the common pitfalls and the elements of successful charrettes, send Jim an email at jpashek@pashekla.com.

Jim Pashek recently attended a Charrette planning workshop sponsored by the National Charrette Institute (NCI) and Harvard Graduate School of Design.  The Charrette, typically involving 6-9 months of activities, centered around an intensive 7 day workshop has been used to bring together disparate viewpoints, build consensus, and generate products that can often move forward projects that may have been on hold for years.

Although there are usually months devoted to workshop preparation, often including a public meeting, the heart is the seven day charrette.  This involves representatives from all sides of an issue, at least three “feedback loops” to make sure the proposals at the end are incorporating stakeholder views and a range of professional participants depending on the type of project.  It is not unusual to have at the seven day charrette, 12- 15 professionals, from land use planners, architects, landscape architects, illustrators, economists, developers, engineers and ecologists.  The cost of a charrette obviously varies depending on the complexity of the project. The NCI suggests that these charrettes often cost from as little as $125,000 to more than $350,000 for very complex projects.

The 9 steps for a successful charrette include:

Because we were in Cambridge for the training, we had the added benefit of a session with Stacie Smith from the Consensus Building Institute (CBI).  The Institute, who started as a group of professors at MIT and who authored the book “Getting to Yes,” have developed an interesting process for getting groups with polarized positions to identify common values that they can build on (the CBI is just beginning to do work in the middle east).

There are situations when viewpoints are so entrenched that consensus building might be a more appropriate process than a charrette.  Other times, this process might be a logical precursor to a charrette workshop.

The NCI has great resources for agencies including a standard scope of work for running a charrette process.  Check out www.charretteinstitute.orgor call them at 503-233-8486.  I would encourage everyone to become more familiar with this great public process tool and consider using it in the appropriate situation.  Anyone who is interested in more information could also give Jim Pashek a call at 412-321-6362 x111.

A recent research study conducted at CMU and MIT found that groups outperformed individuals in accomplishing tasks.  Dr. Anita Williams Woolley at CMU’s Tepper School of Business found that the Group IQ “was markedly different” than individual IQ.  She found three factors that resulted in higher performance by groups:

Dr. Woolley attributes this last factor to women tending to have higher social sensitivity skills, often did not dominate the conversation, and were willing to ask other members of the group if they had better expertise on the discussion topic.
For those of us that frequent study groups, committees and teams, several strategies can improve group performance.  They are:
The research into group dynamics found other interesting conclusions:
Dr. Woolley concluded that, “As the world becomes more complex and employees skills more specialized, more and more of our problems will have solutions that lie at the intersection of individuals with specialties, so they need to be able to collaborate.”
For further information, see the article by Mark Roth in the Post Gazette or contact Dr. Woolley at awoolley@cmu.edu.