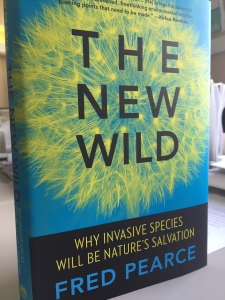 Most of us have bought into an ecological ideology where invasive species do not exist and native plants thrive in a balanced system. In the design world you get points for sustainability if you remove invasives and use native plants. But a new paradigm is evolving as scientists study how natural systems adapt to human impacts.

In “The New Wild – Why Invasive Species will be Nature’s Salvation” Fred Pearce argues that there is no such thing as pristine nature. In addition, nature is neither “stable nor perfectible.” However, current conservation efforts seek to return ecosystems to a static, pre-human state by protecting endangered and weakened species, thereby breaking evolution, holding back adaptation. Pearce writes, “If we want to assist nature to regenerate, we need to promote change, rather than hold it back.”

Pearce argues that invasives, and aliens in general, may be our best bet to heal “the damage done by chain saws, plows, pollution and climate change.” For example, the spreading of Japanese Knotweed may be an indication that nature is bouncing back, reinventing itself for the twenty-first century. In many cases, those invading species accused of crowding out natives have simply taken up space where natives can no longer survive and are declining. In other instances, such as with the water hyacinth, alien invaders may take over due to pollution, and in fact provide an important pollution filtration role. And when pollution decreases, so does the alien species.

While Pearce does acknowledge that there are horror stories about alien species disrupting ecosystems, most of the time introduced species die out or settle down. He and a growing number of scientists claim that aliens have greatly increased biodiversity and can provide important roles in “novel ecosystems” – composed of natives and those introduced by humans. As environmentalists, Pearce believes we should embrace this new ecology and celebrate nature’s capacity for change within the New Wild.

This is a provocative new line of thinking. What’s your opinion? Several of us in the office are also reading “Bringing Nature Home – How You Can Sustain Wildlife with Native Plants” by Doug Tallamy. Two very different schools of thought. More to come later…