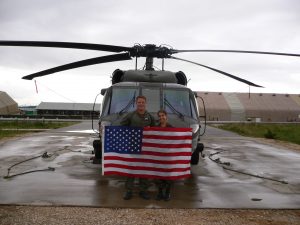 In honor of Veterans Day, we’ve asked Max Geise to share some of his experience as a Vet and how he landed at Pashek + MTR.

Veterans Day is a special time for my wife and me. We met sometime in November of 2004 (she doesn’t know the exact date either), while training at Ft. Hood, TX. We were being deployed with an Army aviation task force for a peacekeeping mission in Kosovo. Although we didn’t start dating until January, we use Veterans Day to celebrate our relationship, reminisce about the transformational times we had in the military (19 years combined), and remember the great friends we served with.

After ten years of living in Illinois, we decided to come back to Pennsylvania and make Pittsburgh home. Saturday will be our second Veterans Day here, and my first with Pashek+MTR. It seems only fitting to reflect on how my military experience as a helicopter mechanic has lead me to a career in Landscape Architecture. 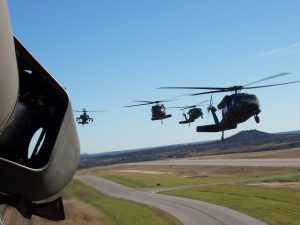 I enlisted in the U.S. Army as a UH-60 Blackhawk Helicopter Crewchief in 1993. When I joined, I knew that I would be a mechanic. What I didn’t know was that my duties would also include being a flight crew member, and manning an M-60D as the door gunner. This meant that I would log many hours viewing the world in flight, from the aircraft I worked on.

My first flight crew assignment was with Company B, 9th Battalion, 101st Aviation Regiment at Ft Campbell, KY. On base, we raced across the tree tops, and dropped down under the tree level in fields and roadways, often while using night vision goggles.

Flying outside of the base’s airspace, we typically flew between 500 and 2,000 feet above ground level. In the pre-smartphone era, this was the perfect height for a young soldier to scout out nightlife areas in neighboring towns and map a route back later. I always loved to drive, so looking for interesting places from the air and trying to find them again in my car became a new hobby.

My second duty station was in South Korea. K-16 Seoul Airbase is near Seongnam on the southern edge of Seoul. This was my first experience outside of the U.S. and Canada, and I couldn’t get enough of the city. From the air, orderly rows of tall apartment buildings and hilltops of greenspace were islands in a sea of small buildings whose rooflines overlapped to hide a network of small roads and alleys.

By regulations, my rank was too low to own or drive a car in S. Korea, so most of my exploring was done by foot, bike, bus and subway (most). I spent as much time as I could trekking around the city, trying to find places I saw from the air. 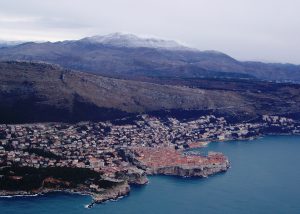 I couldn’t read a lot of the signs, and soon became aware that I was looking for subtle queues in the landscape to help me navigate on the ground, and that those queues were designed for that reason. Returning to the states, I started recognizing the same kind of queues that had only registered passively or subconsciously before. One fence said “follow me to the entrance”, where another said “go away”. That was the beginning of my fascination with the built environment.

I also began to casually think about these things with changes in scale from pedestrian to aircrew. I started thinking about why a town was located where it was, and had it developed before or after the highway or railroad passing through it. It was fun to pick out the clues from the air.

I wasn’t able to do much ground exploring on the deployment, but I did spend countless hours flying over Kosovo and other small countries that had once been Yugoslavia. I thought about the ways in which the landscape and infrastructure impacted the cities and remote mountain villages during the war. Luckily, I did get to see the walled city of Dubrovnik, Croatia from the air and the ground. It was disturbing to think about how the walls that once protected the city from cannon fire only served to prevent people from getting away from modern artillery.

After ten years of flying around the U.S., S. Korea and Europe, I hung up my flight helmet and decided to go back to school. As luck would have it, I met a landscape architect when I was deciding what to study.

Landscape Architecture seemed like a perfect fit, and I couldn’t be happier with the decision. Since joining Pashek+MTR a few months ago, I have already been a part of projects ranging from designing playgrounds to joint municipal comprehensive plans. I no longer observe the natural and built environment from the air, but my work in landscape architecture allows me to continue learning about and shape the ways in which communities create and use spaces. I get to design at eye level, and plan at 10,000 feet. People are often surprised to hear that my time as a Blackhawk crew chief in the U.S. Army led me to what I do now, but for me, the path has made perfect sense.